November 5, 2017 - The Miracle of the Holy Unmercenaries Sts. Kosmas and Damian

The Miracle of the Holy Unmercenaries Sts. Kosmas and Damian 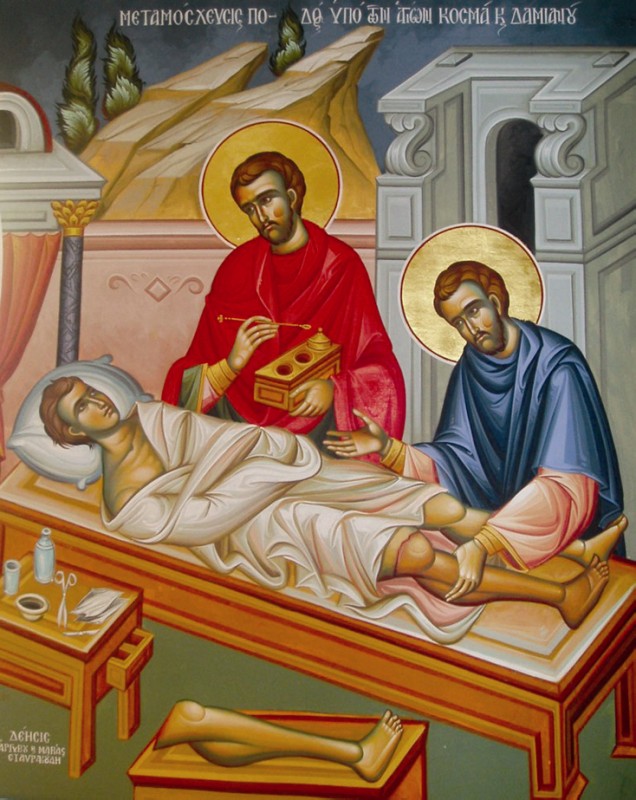 Pope Felix IV founded a noble church in Rome dedicated to the Holy Unmercenaries Kosmas and Damian in 527. There was a caretaker who devoutly served this church and whose his entire thigh had been consumed by a canker. And as he slept, the Holy Unmercenaries appeared to him, bringing with them an instrument and ointment. Then the one said to the other: “Where shall we find flesh to fill the void place when we have cut away the rotten flesh?” Then the other said to him: “There is an Ethiopian that was buried today in the churchyard of St. Peter ‘ad Vincula’, which is yet fresh. Let us bring his leg here, take out the rotten flesh of the caretaker and fill the empty place with it”. And so, they amputated the thigh of the sick man and changed that one for the other. When the sick man woke up and felt no pain, he took his hand and felt his leg and saw that it did not hurt. Then he saw that it was not his thigh, but that of another’s. And when he came to himself, he sprang out of his bed with joy, and recounted to all the people how it happened to him, and that which he had seen in his sleep, and how he was healed. And they went quickly to the tomb of the dead man only to find his thigh cut off and the thigh of the caretaker next to him. Let us pray unto these Saints that they be our succor and help in all our pains, wounds and sores, and that, after this life, by their merits, we find everlasting bliss in heaven.

Lives of the Saints, by Jacobus de Voragine, 1275 AD