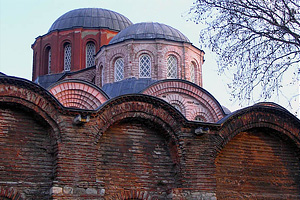 Homes for the Elderly

It was originally the home of Anthemius, praetorian prefect of the eastern territory and grandfather of the emperor of the western Roman territory. He was assassinated in 472 BC. His mansions were turned into a home for the elderly and a church. It was located in the homonymous district in the western part of Constantinople, close to the cistern of Mocius on the seventh hill.

It was founded by Stephan, a courtier of the emperor Marcian (450-457). Stephan is honoured as a saint, commemorated on February 26th. It is noteworthy that this is the only foundation which had been operating until the fall of Constantinople (last mention in 1446). It was located on the Golden Horn gulf in the vicinity of the Plateia Gate (today known as Un Kapanı Kapısi).

It is reported to have been founded by a so called Agathe, daughter of Patrice Peter. She was named ‘Geragathe’ (meaning elderly and virtuous) because she kept her virginity to an old age. All occurrences between her and the emperor Constantine V (741-775) have not been sufficiently documented for. The foundations were in the old “Petrion”, on the Gulf of the Golden Horn.

It was built by Patrice Dexiocrates who lived during the reign of Theodosius II (408-450) within his mansions.  It was the Patriarch John V (669-675) who had taken the initiative for its foundation in the 7th century.

Helene, its founder, was wife to the emperor Constantine VII Porphyrogenitus (913-959). After her death the emperor gave the foundation significant privileges which were ratified with an imperial golden seal.

There is little evidence regarding this foundation, except for a stamp dating back to the 9th century. It was situated in the “Prosphorianon”, where the railway station of Sirkeci is today.

According to the Chronicle of Anonymous (14th century), Ephrata built himself a mansion, which later became a Home for the Elderly located in Demakella, later named after Ephrata’(Constantine Satha, Medieval Library, Volume VI, 53), in the present area of Kumkapı (known in Greek as “Kontoskali”).

The only evidence for its existence comes from a legal document. Its location is uncertain. It is likely that it was adjacent to or belonged to the church of Prophet Elias which was inside the Petrion.

He was the brother of Efvoulos and lived in the era of Justin I (518-527). He converted his mansion into a Home for the Elderly and added a church to it to cater for the elderly.

It was founded during the reign of Emperor Maurice (582-602) by Patrice Carianos. It was in the area of Blachernae, in the district which is still known as ‘Carianos’.

11. At the Church of Saint Clemens

Scarce evidence suggests that it was run by Patriarch Peter (654-666). It was located next to the Church of Saint Clement “far away in the Eudoxias, beyond the Anaplou”, on the banks of the Bosporus where the Rumeli Hisarı is now found.

It was constructed by the emperor Leo VI the Wise (886-912), who turned a public building named ‘kefe’ into a Home for the Elderly. (The greek word ‘kefe’ means a scent or an arched pathway, an arcade). It was visited by the emperor on Friday each Holy Week on his way back from Blachernae where he went for pilgrimage. Hence, it must have been near Blachernae.

It was a home for the poor and the elderly built by the founder of the convent of Saint George of Mangana, Constantine the IX “Monomachus” (1042-1055), adjacent to the convent facing the Sea of Propontis.

The only reference to it lies in the ‘Lives of Saints’, where the saints Theodore the Presbyter and Pafsolypios “from the Melovios’ Home for the Elderly” are commemorated on April 15th.

As stated in a legal decision, this foundation was founded by emperor Romanus Lecapenus (920-944). Presumably it was next to the homonymous convent whose church has survived until now and is known as Bodrum Cami.

It was originally the home of Narsos, who had been prefect during the reign of Justin II (565-578). He financed the building of a hostel, a home for the elderly and a church. The district known as ‘Narsou’ lay between the  Drungarii Gate (Odun Kapi) and the Gate of St. John at the Golden Horn (Zindan Kapi), close to Suleymaniye Cami.

This was a branch of the great homonymous orphanage, located, according to Anna Komnena , “in the vicinity of the acropolis”, where today the Yali Kösk stands, inside the Gül Hane. For more details see St. Paul’s Orphanage.

It is only mentioned in the constitutional documents of an imperial building. It was built on the Golden Horn Gulf in the homonymous district belonging to the Phanar.

In the years of Justinian (527-565), it was the residence of Patrice Peter and was converted into a home for the elderly with a church. There is no evidence of its location.

20. At the Stables of Prassini

During his very short reign, Artavasdos (742) built a home for the elderly where the stables of the Prassini (the Greens) where earlier. It was situated at the coast of Zeugma near the Drungarii Gate (Odun Kapı).

It was built by Romanus Argiros (1028-1034) and situated by the Domninos river, close to the Market (Kapali Çarsi).

It was founded by Stefan, a courtier of Emperor Maurice (582-602). The location Sagma is unknown.

It was founded by Patrice Sevirus who was a step brother of Emperor Constance (642-668). It was built inside his mansions and located close to theForum of Tauri, in the vicinity of the Cami of Beyazit

It was operated by Patriarch Thomas (667-669) before his elevation to the throne. It was situated in today’s Bebek on Bosporus.

Originally the home of Patrice Florence, who lived in the era of Arcadios (395-408), became a center for the elderly prior to his death. It was inside the old gardens of Seragio.

It is alleged to have been founded by St. Helen (247-328), Constantine the Great’s mother. It was located in Samatya by the coast.

Constantine Porphyrogenitus (913-959) converted the majestic stables which had been built at the rear of and around the Church of Aghia Sophia (God’s Wisdom) by the Patriarch Theophylactus (931-956) into a home for the elderly.